IIP numbers for March 2012 showed a dip of 3.5%. Economists, analysts, fund managers and a majority of the financial community were quick to raise concerns about the decline. The question is- are the IIP numbers being interpreted correctly?

I don’t believe so. I believe that IIP is tracking a very normal pattern of recovery, not one of contraction.

Take a look at the graphs below for IIP and PMI. Which is a better interpretation– that the economy is contracting or that it is on a slow and steady recovery path? 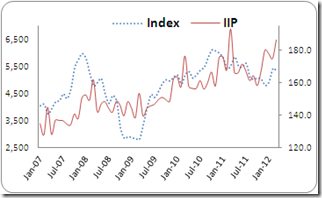 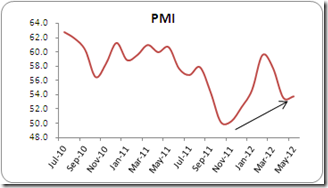 This is a pattern of recovery, not of contraction. Three years back, in 2009, markets broke out of the bottoming pattern, even as IIP was tracking negative YoY numbers.

Posted by Amar Harolikar at 8:48 PM