India’s growth story is very much intact so far, even as IIP has posted 0.1% YoY growth. It won’t make a difference even if IIP posts negative YoY numbers for a few more months.

Refer to my earlier analysis regarding the way looking at YoY numbers is not always the right way to interpret macro trends. The right way to look at the GDP and IIP numbers is to simply look at a chart of absolute IIP and GDP over time. Furthermore, one has to differentiate between a long term trend short term business cycles.

Take a look at the chart below of IIP numbers for the past seven years along with a 12 month moving average. As can be seen from the chart, the long term uptrend is intact, and is comprised of many ups and downs as part of regular business cycles. 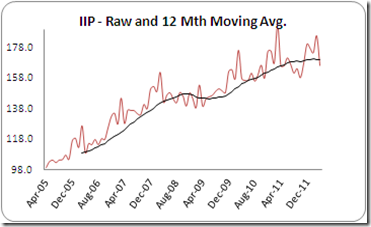 Keep in mind that IIP was posting negative YoY numbers during April - June 2009 even as corporate profitability was improving and markets were making new highs. In fact, the IIP YoY % were posting very flattish trends until Oct 2009. During this same time period Nifty more than doubled from 2500 levels to 5100 levels!

As for S&P, as per my previous story, one has to be wary of their reports and ratings. In 2009 they had downgraded India’s sovereign rating just three months before the markets did an upward breakout and growth numbers turned around!