The GDP numbers declared last week for the quarter that ended in June 2012 showed the economy growing by 5.5% year-over-year (YoY). I came across many economists and analysts who say that in the short term there are signs of recovery given the 5.3% YoY growth in the quarter that ended in March 2012. There are many more who say that India’s long-term growth story is under threat given the sub 7% growth rates in the past five quarters.

Well, here’s the right way to interpret these numbers.

First, the difference of 20 basis points between the 5.5% and 5.3% is of no consequence, especially given the large revisions and mistakes occurring in the government’s numbers. Furthermore, the difference is just around 12 basis points if we include the second decimal place! And if you take into account that the March quarter typically shows a bump up in GDP growth rates, then the June 2012 quarterly growth rate of 5.5% should actually be interpreted a little negatively.

Second, while looking at GDP numbers, an over-reliance on looking at YoY growth rates would very often lead to an incorrect interpretation. In order to correctly see the long-term growth trend and the impact of business cycles, one has to also look at the GDP chart in absolute numbers. 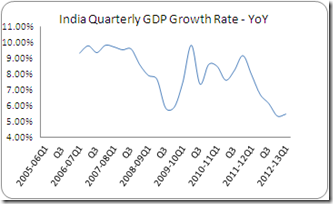 Now take a look at the chart of absolute GDP. 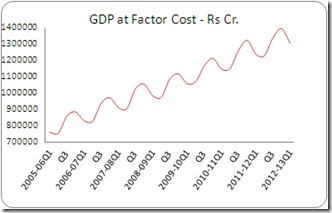 Recently, even the RBI reduced India’s long-term trend growth rate from 8% to 7.5%. I normally have great respect for the quality of analysis at the RBI, however, this time I would tend to believe the RBI might have been a little premature to reduce that rate.

To put things in perspective take a look at the chart below. It shows a comparison between absolute GDP of the U.S. and India over the same period as the previous charts. Since the U.S. GDP is in USD and India’s GDP is in INR, I have indexed it to start at 100 for both. 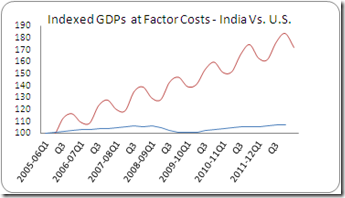 If India’s long-term story is supposed to have ended based on the GDP trend, then what about the U.S.? Is it going vanish from the economic landscape and become a powerless player?

Well, no. India’s growth story is not over and neither is the U.S. going to lose its pre-eminent position in the global politico-economic landscape anytime soon. Period.