5.3% GDP : Numbers not being interpreted correctly, recovery is intact

The latest GDP number of 5.3% caught many people, including myself, by surprise. Looked at in isolation, this number does sound very disappointing and many analysts and economists have been quick to come out with comments on how the India growth story is probably over and how the government is killing growth.

In fact, here’s what an ET story had to say: “HSBC labelling the nation as a ‘gasping elephant’ while Credit Suisse said latest numbers will send ‘shivers down’ the spines of coalition politicians of ruling UPA.”

However, when interpreted the right way and along with other macro numbers, the GDP numbers actually show that the recovery process is intact and the economic growth engine is chugging along just fine.

And this conclusion assumes that the GDP numbers don’t get revised upwards. The credibility of our government for data accuracy is a bit suspect given the numerous mistakes detected in the past with IIP, exports and the GDP numbers themselves.

The right way to look at the quarterly GDP numbers is to simply look at a chart of GDP (in Rs Cr) over time. Take a look at the chart below. What does it show? That the economic growth engine is chugging along just fine or that the economy is trouble? I rest my case. 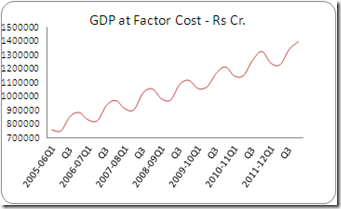 It’s not always right, and sometimes outright dangerous as in this case, to draw conclusions based on a single year-over-year growth number. This apparently low 5.3% growth number is driven by the high base effect of the last two years, when there was a growth spurt after the 2008 slowdown.

In my previous analysis, I argued that the recovery process as well as the India growth story is intact. Does it mean that we are back on a high-growth path and that everything is hunky-dory? No, not at all. The pace of growth is no doubt slowing down and there are concerns around a possible rupee fall, inflation and fiscal deficit.

However, there is nothing at all alarming in any of the macro numbers declared so far. All that is happening is that we are going through a very normal business cycle. After a burst of growth in 2009-10 and 2010-11, the economy is taking a breather, so to say. The economy continues to grow, but at a slower rate. 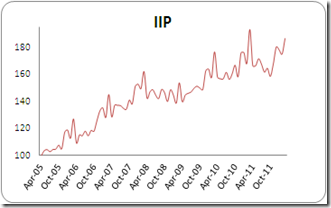 One of the strongest indicators of growth is the corporate profitability numbers which have been showing a steady rise for the last two quarters. This strength in the corporate sector is borne out by double-digit salary hikes, good bonuses, increases in hiring and high attrition rates, which are indicators of an expanding economy, not signs of a moderating economy. Going forward, the fears and paranoia surrounding a possible Greece exit and other global issues are likely to prove to be a blessing in disguise for India because of the impact on commodity prices and inflation.

The bottom line is that the economy went through a moderation phase in the second half of 2011, is now on a recovery path and is very likely be able to maintain growth rates in the 8% range, governance and reform issues notwithstanding.

I’ll end this one with a nice quote on data analysis I came across sometime back. “Conducting data analysis is like drinking a fine wine. It is important to swirl and sniff the wine, to unpack the complex bouquet and to appreciate the experience. Gulping the wine doesn’t work.” Daniel B. Wright (2003).