The latest economic numbers point toward U.S. economic growth taking a pause and economy contracting in China and the Eurozone.

What does that imply?

The immediate impact is likely to be fear, with stock markets taking a sharp dip. However, a deeper analysis shows that, except for the Eurozone, global recovery is well underway and at worst is taking a pause. Any panic selloff in equities would be a good opportunity for professional investors to accumulate equities.

Markit’s flash PMI numbers released today point towards a slowdown of manufacturing growth in the U.S. and contraction in China and the Eurozone. U.S. durable goods orders and jobless claims, released today, indicate a flattening trend.

How on Earth do I then say that global recovery is intact? Here’s how:

Recovery is never in a straight line. There are dips and there are plateaus. The U.S. is going through a plateau and China is going through a dip, with a bottoming out process underway. The Eurozone is in a league by itself and is in the middle of a full-fledged recessionary cycle, except for Germany, which is slowing down sharply but has been able to dodge a recession cycle so far.

Now let’s take a look at the graphs which bring out the trend better than just the latest monthly numbers.

The U.S. flash PMI for May, although showing a drop, is still slightly higher than a few months back and is actually tracing a flattening pattern. Take a look at the chart below. Does it look like a downward trend or a flattening trend? 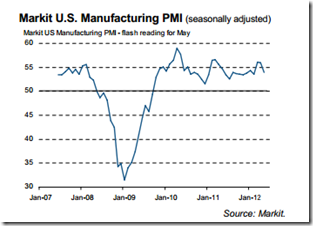 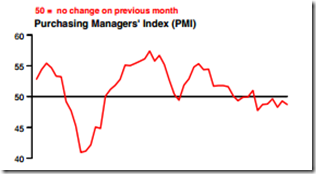 Japan’s latest PMI numbers have not been declared yet, but it is in a sharp recovery mode with first-quarter 2012 GDP having gone up 4.1%.

Together, the economies of the U.S., the Eurozone and China comprise more than 50% of global GDP.

Europe, comprising around 25% of global GDP, is no doubt in trouble. Its major economies ­– Germany, France and the U.K., comprising nearly 15% of global GDP – are just about dodging a recession or are in a minor recession. But the remaining countries in Europe are in the midst of a major recession, and they comprise just 10% of the global GDP.

If we look at the size of these economies and the current stage of their business cycle, my conclusion remains the same as before, that global recovery, except for the Eurozone, is intact. At least, that’s what the data says.